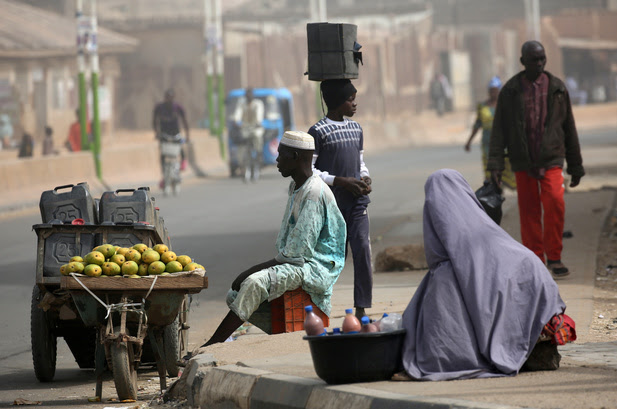 A recent, so far unexplained, spike in deaths in Kano, Nigeria, highlights the difficulty of tracking the spread of coronavirus, especially in certain large African urban areas. Kano is regarded as Nigeria’s second largest urban agglomeration, after Lagos. It is the capital of Kano state, the first or second largest in population. The population estimate of 4 million for the city is almost certainly much too low. The city sprawls over some fifty square miles and is highly decentralized in governance, with forty-four local government areas. Large number of people have fled to the city to escape the breakdown of security in the north as well as drought and other perennial hazards. Overcrowding is ubiquitous, and most people are very poor. The population is predominately Muslim, though with a small Christian minority, and hosts the emir of Kano, one of the most senior traditional rulers in the north.
Even in normal times, a large number of Kano residents die outside of hospitals. The dead are not deposited in morgues, and the cause of death is nowhere recorded. When they can, residents return to their home villages to die or they die in the urban households where they have been living. Following Muslim practice, the dead are buried immediately. Hence statistics are of little use in charting rates or causation of death. It was gravediggers that called attention to the recent spike in deaths.

City residents are fearful that the spike in deaths is directly related to COVID-19. Apparently, so is President Muhammadu Buhari, who has extended for another two weeks in Kano city a lockdown even as he is loosening those restrictions elsewhere. As of April 28, according to the Nigerian Center for Disease Control, Kano state had 115 reported COVID-19 cases. State investigators are looking into the spike, but the definitive answers that might be provided by tests may be hard to come by. Investigators are conducting “verbal autopsies,” interviewing relatives of the deceased about the nature of the deaths, partly because testing capacity is low. Nigeria had conducted just under 13,000 tests as of April 28. One of the Kano testing facilities was contaminated and thus closed for cleaning, further delaying results. Doctors who observe patients with COVID-19 symptoms often have no tests on hand to verify if the patients have the disease.

Some local officials and observers see the death spike as the result of multiple causes. For example, most private hospitals in Kano have been closed to prevent the spread of COVID-19. Public hospitals remain open, but they are geared now to responding to COVID-19. Under normal circumstances, for those that can afford it, private hospitals provide care for many of those with preexisting conditions. Others receive no medical treatment at all. Even for those that are relatively well-off, with the hospital closures, those afflicted with diabetes, cancer, or heart disease, for example, go untreated. Those with preexisting conditions and the poor are especially vulnerable.
In the best of times, Kano’s disease burden is heavy, and life spans are short. The city hosts myriad lethal diseases, including malaria, meningitis, and Lassa fever. Clean water is difficult for the poor to access, and a high percentage of the population is malnourished. Hence, whatever role COVID-19 has played in Kano’s apparent death spike is difficult to determine. The same will likely be the case in cities such as Lagos or Kinshasa, but not necessarily elsewhere. For example, morgues are in greater use in Abidjan and Johannesburg, facilitating the capture of cause of death data. In Kano, the extent of the disease is simply unknown at this time.