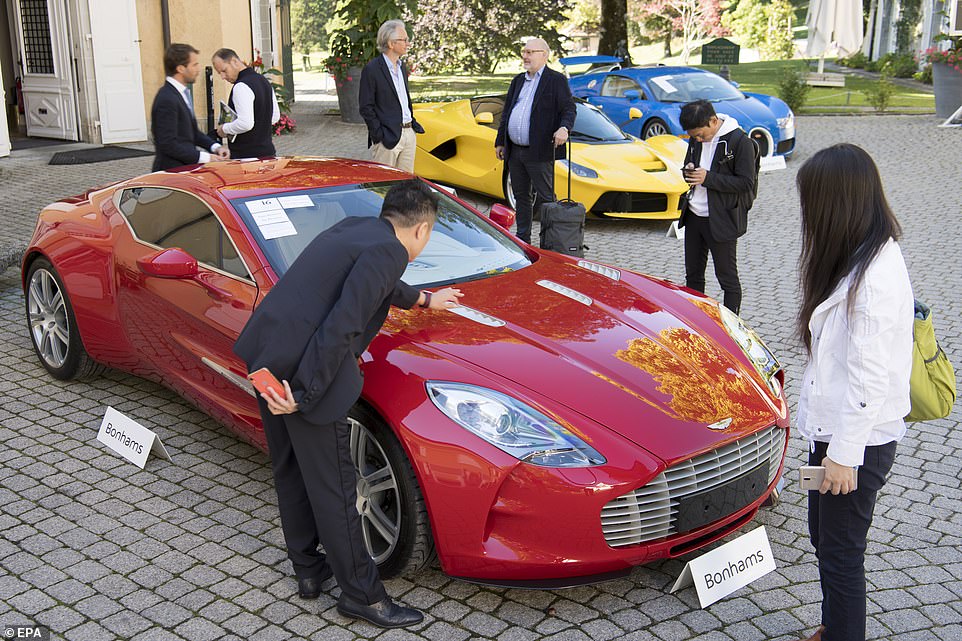 Fleet of luxury cars including Ferraris and Lamborghinis worth more than $20m are sold at auction after Swiss authorities seized them from son of Equatorial Guinea’s president in money-laundering probe.
• Auction house in Switzerland sells off 25 luxury sports cars including rare Lamborghini Veneno roadster
• Vehicles were seized from son of Equatorial Guinea’s president of 40 years, Teodoro Obiang
• Taken following a probe into money laundering and mismanagement of public assets by the country
• Auctioneer Bonhams sold the lots for £22 million – with profits going to charity of people of Equatorial Guinea

An auction house in Switzerland has sold 25 luxury cars including Ferraris, Rolls-Royces and Lamborghinis that Geneva authorities seized from the son of Equatorial Guinea’s president in a money-laundering probe.
Swiss authorities say the sale Sunday by auctioneer Bonhams fetched £21.9 million, with the proceeds going to a charity to benefit the people of oil-rich Equatorial Guinea.
The sale took place at the Bonmont Golf & Country Club in Cheserex near Geneva, Switzerland
The auction came after the Geneva prosecutor’s office announced in February it had closed a case against Teodoro Nguema Obiang Mangue, the son of the country’s four-decade president, Teodoro Obiang, and two others following a probe of money laundering and mismanagement of public assets.
Swiss authorities seized the cars and ordered the sequestration of a yacht in 2016
The yacht was released in the arrangement announced in February, under which Equatorial Guinea agreed to pay Geneva authorities £1.1 million ‘notably to cover procedural costs,’ the prosecutor’s office said.
The standout lot in the auction was a white-and-cream Lamborghini Veneno roadster, one of only nine such versions produced, that has been driven only 325 kilometers (201 miles), Bonhams says. It was expected to fetch at least £4.3 million.
A Ferrari ‘LaFerrari’ – featuring Formula 1 and GT inspiration – was set to fetch at least £2.1 million.
The Equatorial Guinea president’s son, who is also a vice president, has been ensnared in legal trouble elsewhere. Last year, Brazilian officials said $16 million (£13 million) in undeclared cash and luxury watches that were seized from a delegation he led may have been part of an effort to launder money embezzled from the country’s government.
And a Parisian court in 2017 convicted the president’s son in absentia of embezzling tens of millions of euro from his government and laundering the proceeds in France.The court handed down a three-year suspended jail sentence and a suspended €30 million (US$35 million) fine for Teodoro Nguema Obiang Mangue, known as Teodorin, who is also Equatorial Guinea’s vice president. The court seized his assets in France valued at well over €100 million.
‘This verdict against Teodorin Obiang is further proof that rampant government corruption in Equatorial Guinea has robbed its people of their country’s oil wealth,’ said Sarah Saadoun, business and human rights researcher at Human Rights Watch.’The French government should repatriate the money ensuring it goes to key services where it should have been spent.’ The case has been appealed.
The Geneva prosecutor’s office in February cited rules allowing prosecutors to close cases in which the person under investigation had ‘repaired the damage or done everything that could have been expected of him or her to make up for the wrong that was caused.’
The investigation involved authorities in the United States, the Cayman Islands, France, Monaco, Denmark, the Netherlands and the Marshall Islands.