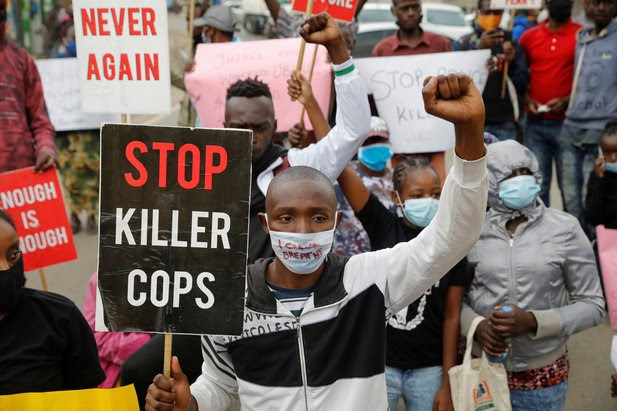 Protesters hold signs and placards during a demonstration against police killings and brutality, in the Mathare slum in Nairobi, Kenya, June 8, 2020.
Baz Ratner/Reuter

The African media has closely followed the Black Lives Matter protests in the United States, almost always in solidarity with the protesters. Especially among African human rights groups, the American focus on police brutality resonates strongly. While generalization is risky about a continent with more than fifty states and one billion people, it can be said that for most Africans, the policeman is not your friend. The popular perception is that police brutality is the norm.

Police use of excessive force is an old song in Africa, and reform is difficult. Police forces tend to have been established by the former colonial powers, and they are national—a gendarmerie—rather than local. They are often poorly trained and paid; many resort to petty corruption simply to feed their families. Too often their culture is oriented toward protecting the state, just as it was during colonial rule, rather than serving the public. The elites that control and benefit from the state often dismiss cases of abuse and are slow to institute meaningful reform.

In many African countries, the police are one element in a system of institutional underdevelopment. Where the rule of law is feeble, courts are often corrupt, and prison conditions can be unspeakable, people will take justice into their own hands. There are reports of mobs lynching an alleged thief caught stealing in a city market, for example. Hence, too often the police function as a weak, under-resourced occupying power, too ready to resort to excessive force.

Hence, meaningful police reform may require the overhaul of the entire legal and judicial system and a fundamental, positive realignment of governments with the people they ought to serve. Such a reform program is not so simple or easy on a continent in the midst of a pandemic and one in which the quality of political leadership is often poor.

**Courtesy of Council on Foreign Relations